All You Need to Know About Trans Siberian Train

Long distance trains are usually classified by speed and service level. Choosing the Trans-Siberian packages, you will go on fast trains. For a trip with stopovers, if you wish to explore the cities en route, you may ride lower category passenger trains as well, especially in Russia.

Fast trains (skorry poezd). Train numbers from 1 to 160. They are very comfortable and fast with minimum stops in larger cities. The timetables are convenient (departing at night, arriving in the morning). Average speed – 70-90 km/h.

Speed trains (skorostnoj poezd). Train number from 161 to 169. Average speed 100 km/h. ; all coaches equipped with DVD players, very comfortable seats. These trains are only available on some specific routes.

Classes on the Trans-Siberian Railway

Trans-Siberian railway trains are either Russian trains, Mongolian trains or Chinese trains. They all are comfortable and usually offer 1st, 2nd and 3rd classes. 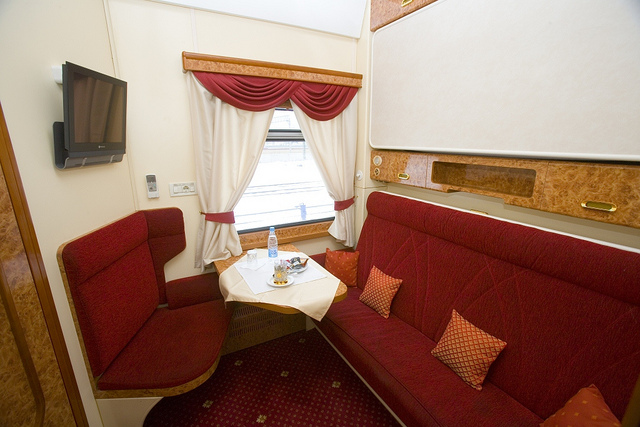 There are two berths in each 1st class cabin, 9 compartments per coach. On Chinese and Mongolian trains the beds are in bunk bed upper and lower alignment with a small sofa. On Russian trains - two lower beds. There are two washrooms and toilets one on each end of the corridor and are usually very clean. All compartments are lockable. First classes on the trans-Siberian train are also known as Spalny Vagon or SV. In high season only, train N4 and N24 have a few luxury wooden compartments with a sink attached to the compartments.

Second Class ( Kupe) has four comfortable beds per cabin, 9 compartments per coach. There are 2 washrooms and toilets one on each end of the corridor and are usually very clean. The compartments are lockable. Bottom berths have odd numbers (1,3,5 etc.), upper berths have even numbers (2,4,6,8, etc.).

Differences between first and Second class

The usual distinction on almost all Trans-Siberian trains is that second class compartments have 4 berths and first class - 2 berths. There is very little difference in compartment size, decor or window size.

The Chinese call their compartments soft sleepers being a 4 berth compartment nearly the same as a Russian 2nd class kupé and deluxe sleeper being a 2 berth compartment that usually has a shower/basin shared between 2 cabins, a single upper and lower berth and a small couch.

Though all International trains keep high standards, there is limited availability of First Class carriages, and you should book far in advance if you do not want to miss a chance to travel in a First Class cabin.

Both First and Second Class coach is looked after by attendants called a ‘provodnik’ (male) or ‘provodnitsa’ (female). A provodnik will check your ticket at the door to the sleeper when boarding. Shortly after departure, the provodnik will come round to give you the bedding (two sheets, pillowcase, and a towel) in sealed packs. You will find blankets and mattresses in your compartment. At the end of the corridor, a samovar with unlimited free hot water is available. You can also have a full meal in a restaurant car which most Trans-Siberian trains have. They serve also drinks and snacks. You will spend less than EUR 20 for two courses and a couple of bottles of beer.

Provodnik does the daily cleaning of the toilets which are at each end of the carriage. Only in the 1st class of train #3 and #4, and in a separate carriage ( service-wagon) showers are provided in every compartment.

Safety on the Trans-Siberian

Safety on the Trans-Siberian trains is not a problem. Sensible precautions, though, such as locking your compartment from the inside when sleeping or getting the attendant to lock it from the outside when leaving it should be taken.

The Trans-Siberian Railway train tickets prices can be only indicative for Trans-Siberian, Trans-Mongolian, and Trans-Manchurian routes. Depending on the season, date of travel and availability the prices can vary a lot.