Russia offers its visitors all kinds of attractions in major historic cities of Moscow and St Petersburg. But what is life in the rural regions of Russia? How does a traditional Russian village look like? These are common questions among foreign travelers.

Undoubtedly, there is a great difference between Moscow, St. Petersburg, and rural Russia. Life in the real Russia with numerous small towns and villages, pristine nature, old, wooden churches, and the everyday life of ordinary people, their traditions and customs offer new insights into modern Russia.

Russia has something to offer any visitor looking for beautiful landscapes, rural customs and simple, but delicious cuisine.

During the Soviet regime, rural regions had state industrial farms producing potatoes, beetroots, wheat, and other cultures. Many of these communities consisted of at least 200 workers and were run by local Communist Party organizations. When the USSR collapsed, workers were no longer restricted to their designated workplaces, and many of the youth and middle-aged people fled to the cities. Now, when these Soviet farm communities are lost, various abandoned buildings, empty streets, and destroyed grain silos dominate most villages with few people inhabiting them. It is estimated that about 35,000 rural communities have less than 10 inhabitants.

However, rural communities and their cultural heritage are preserved, and they form an integral part of the country’s national identity and cultural relevance. Undoubtedly, Russia’s countryside possesses an intimate, tranquil beauty that is rarely seen in the major cities.

Russia’s small towns and villages are characterized by kremlins, churches, and monasteries, tucked between hills, sitting in unending plains of grass, sleeping next to a river, and all of them distinctly Russian.

The village of Vorzogory is located on the shore of the White Sea, 25 km to the west from the town of Onega. The village was founded during the reign of Ivan the Terrible in 1575. For centuries the village was famous for its shipbuilders. The local craftsmen built wooden ships for the monks of the Solovetsky monastery.

One of the village highlights is the wooden Church built in 1850, and a unique monument - the triple wooden complex consisting of St. Nicholas Church (1636), Vvedenskaya Church (1793) and bell tower (XVIII century).

In 2015 the old merchant village of Vyatskoe in the Yaroslavl Region (about 300 kilometers from Moscow) was voted to be the most beautiful village of Russia.

This poor and gloomy village in 2007 thanks to private investments, was transformed into a historical and cultural complex home to 10 museums, three hotels, a restaurant, a cinema, and a concert hall.

These renovations have greatly affected the lives of local people – almost half of the village's population is currently employed in local museums and other tourist attraction spots. Little churches, beautiful landscapes, and local museums attract nearly 100,000 tourists every year to this village of 500 local inhabitants.

The village of Kilza is a picturesque place known since the 17th century. It is located in the Mezen district of the Arkhangelsk region at the mouth of the river of the same name. Kielce belongs to the Arctic zone of the country and was recently officially included in the Association of Beautiful Villages due to the surviving centuries-old wooden buildings, the traditional way of life of local residents, and the presence of most beautiful nature around. The residential buildings indicate to the skill of local northern architects. 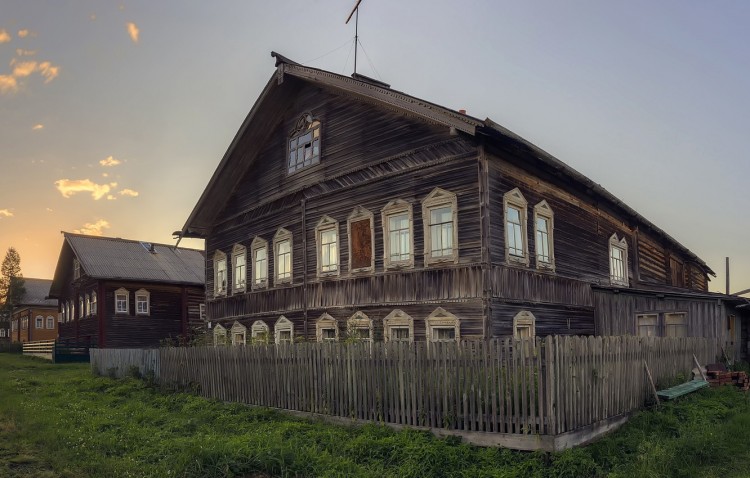 The village of Kimzha in the Arkhangelsk Region was founded by Old Believers, and remains a fascinating place in the Russian Arctic. Every house here is a monument of northern wooden architecture - many of them being over 100 years old.

This Arctic village was founded in the early XVI century. Since then, it has flourished with around 100 inhabitants living in 71 historical buildings, including the five-domed wooden hip-roof Church. Kimzha resembles a museum of wooden architecture.  Visitors can admire children playing in the courtyards of rural fairytale cottages, smell gingerbread cookies, and smoke trails drifting from chimneys.

Found in the Karelian Republic, Kinerma is a beautiful ancient village that has preserved its traditional way of life. The town is full of welcoming farmers and artisans, who are keen to share their knowledge about Karelian dishes and local customs.

In Kinerma, visitors can find a wooden 18th-century chapel, complete with a surviving iconostasis, and an old cemetery. There are wooden residential buildings which are recognized as architectural monuments, alongside open-air museums that evoke the development of folk architecture in Southwest Karelia of XIX-XX centuries.

We hope that this introduction to the Russian rural life has awakened your desire to learn more about Russia and its treasures beyond the country’s big metropoles.  Russia is definitely more than the shining and magnificent Moscow and world-famous St Petersburg.