What is the Trans-Siberian Railway? 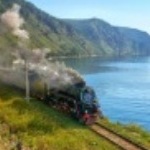 The longest railway line in the world, the Trans-Siberian Railway, connects Moscow with the Russian Far East and over to the Sea of Japan. Many branches of the railway also connect China, North Korea, and Mongolia.

After the Moscow-Pyongyang Railway and the Kiev-Vladivostok Railway, the Trans-Siberian Railway is the third longest single continuous service on Earth. The railway spans an impressive seven time zones and takes eight days to complete the journey. The railway is often associated with the main transcontinental Russian line connecting hundreds of cities, big and small, of the Asian and European parts of Russia.

Dating back to 1890, on orders from Tsar Nicholas II, the Russian Far East section of the Trans-Siberian Railway was constructed to provide the tsar and his staff the opportunity to travel in comfort across the wilderness of Siberia. Beginning in Moscow, the main route of the railway starts at Yaroslavsky Vokzal and runs through Yaroslavl, Chelyabinsk, Omsk, Novosibirsk, Irkutsk, Ulan-Ude, Chita, and Khabarovsk to Vladivostok. In addition, a Russian administration based in Harbin built the Chinese Eastern Railway, the Russo-Chinese section of the Trans-Siberian Railway. This section connects China with Russia and provides a shorter route to Vladivostok.

Interesting fact about the Trans-Siberian Railway

The Trans-Siberian Railway was believed to be one of the reasons Russia lost the war in the Russo-Japanese War of 1904-5, seeing as how the train was only a single track train, and for that reason, could only travel in one direction, slowing down necessary supplies, troops, and ammunition needed for battle, but in World War II, the railway played a very important role, serving as the essential link between Japan and Germany.

Some of the effects of the railway include a great boost to Siberian agriculture, helping immensely with exports to Europe and within central Russia, and it also became the main source of travel for peasant-migrants coming from the Western parts of Ukraine and Russia. Roughly four million peasants arrived in Siberia between 1906 and 1914.

Today, the railway remains the most important link for transportation in Russia and nearly 30% of exports travel on its line. The railway has also become a popular tourist destination, but most of its use still comes from its domestic passengers. A ride on the Trans-Siberian Railway is truly an unforgettable experience as you pass through gorgeous, sprawling scenery and view the unique beauty of Russia, China, and Mongolia from the comfort of your seat.

East West Tours offers many Trans-Siberian tours which can be found in the left sidebar. Take the Mongolian Route, the “Tsar’s Gold” Train, the “Imperial Russia” Train, or the Classic Trans-Siberian.