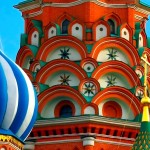 Historically the preeminent symbol of the Russian State, the Kremlin is an architectural marvel that has captured the interests of tourists the world-over.  Original construction of the Kremlin dates to the early 10th century, but the original wooden fortress was destroyed by the Mongols in 1238.  Subsequently, another wooden structure was completed but also destroyed in the great fire of Moscow in 1365.  Interestingly, even the first stone-structure Kremlin was destroyed by the Mongols in 1382.  Nevertheless, as Russia became more powerful and Moscow grew into the cultural and political centre of the country, a group of Italian architects began work on the current incarnation of the Kremlin in 1485.

Don't miss the Kremlin on your next trip to Russia!